Elohists from different parts of Metro Manila join hands as they share the love of God the Mother to patients suffering from Thalassemia.

Thalassemia Major is a blood disorder where the body cannot make normal hemoglobin needed to produce healthy red blood cells. This results in excessive destruction of red blood cells leading to the most severe form of anemia, which, if left untreated, brings about complications such as liver problems and heart failures.

An info-video was created and was incessantly shown from November 3 to November 13 in in the Thalassemia awareness booths set-up in UP Diliman, PUP, UCC and NU. The awareness booth also served as a registration booth for the blood donation drive held on the 16th of November. 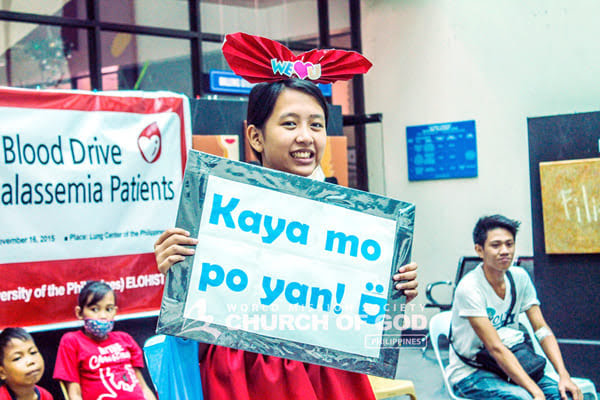 During the blood drive at the Lung Center of the Philippines, 200 people, majority of whom are university students, willingly gathered to donate blood. Among them, 91 persons were deemed healthy and were able to successfully donate their precious blood.

Former AFP Colonel Torregova, a galloner, made a surprise visit to the blood drive to encourage the donors. Understanding the emotional stress and strain that the disease inflicts upon the families of the patients, the organization held a Consolatory Party for 25 families on November 23, it was also in this party that the donors met their beneficiaries. Mrs. Gertrude Santos, provided the main entrée’s for the patients and their families while the World Mission Society Church of God provided for the volunteers.