The goal of the 1st New Song Festival was not simply to showcase members’ singing ability. Behind the scenes, teammates gently encouraged shy members to join the contest. Choirs cheered for each other and all sang praise to God for the duration of the event. Hence, the event’s team format fostered cooperation and brotherhood among members and closeness throughout the church.

The 1st New Song Festival started with opening remarks from Quezon City Main Church pastor Choi Jeongmaan. Next was the event’s first performance: an icebreaker by elementary students dressed like their older siblings in the choir.

After this, the competition proper of the 1st New Song Festival began. The Last Remnant, a team of male youth members, sang “Heaven’s Will” with bold voices and strong unity. Trumpeta ni Ina, made of female young adults, sang “Let’s Go to the World” in Filipino, holding different countries’ flags. Mother’s Blossoms, female adults wearing colorful flower crowns, performed “Fill Our Hearts With Love.” High school student team Munting Boses ni Elohim sang “I Imagine to Myself” with refreshing voices. Hope for Heaven, a female young adult choir, sang “All You Pass Through the Red Sea” in Filipino and featured blue “water” props. The “Work of God’s Hands,” the church’s male adults, performed “The Glory of Jerusalem” and had the audience clapping along. Finally, Fishers of Love, a team of female adults, sang “Heaven’s Mother is the Way” with voices that filled the whole venue.

Lunch was served after the competition proper of the 1st WMSCOG New Song Festival. While awaiting results, everyone watched videos of the Messiah Orchestra and of the first-ever New Song Festival. Both videos featured the association of WMSCOG branches across Korea. 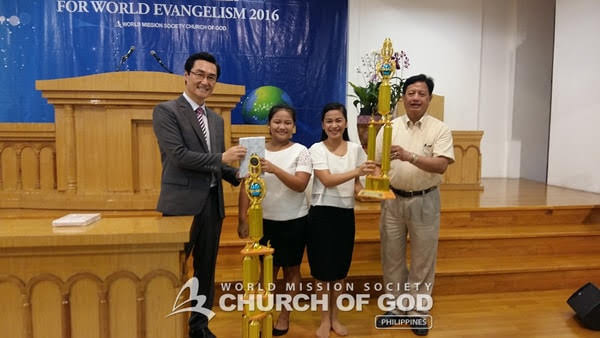 Because of all members’ efforts and encouragement, the Fishers of Love emerged as the 1st WMSCOG New Song Festival’s champions. Trumpeta ni Ina came next as first runner-up. Mother’s Blossoms became second runner-up while Hope for Heaven became third runner-up.

A resurging sense of joy and unity overflowed in the church regardless of the results. This was because everyone could sing praise to Heavenly Father and Heavenly Mother during the 1st New Song Festival. As a result, the Quezon City Main Church would then plan a 2nd New Song Festival to boost harmony even more.